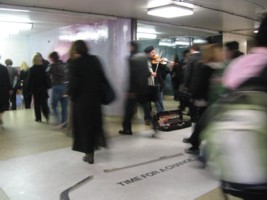 Song on the Subway

Rush-hour on the A train. A blind man
staggers forth, his cane tapping lightly
down the aisle. He leans against the door,

raises a violin to chin, and says I’m sorry
to bother you, folks. But please. Just listen.
And it kills me, the word sorry. As if something like music

should be forgiven. He nuzzles into the wood like a lover,
inhales, and at the first slow stroke, the crescendo
seeps through our skin like warm water, we

who have nothing but destinations, who dream of light
but descend into the mouths of tunnels, searching.
Beads of sweat fall from his brow, making dark roses

on the instrument. His head swooning to each chord
exhaled through the hollow torso. The woman beside me
has put down her book, closed her eyes, the baby

has stopped crying, the cop has sat down, and I know
this train is too fast for dreaming, that these iron jaws
will always open to swallow a smile already lost.

How insufficient the memory, to fail before death.
Who will hear these notes when the train slides
into the yard, the lights turned out, and the song

lingers with breaths rising from empty seats?
I know I am too human to praise what is fading.
But for now, I just want to listen as the train fills

completely with warm water, and we are all
swimming slowly toward the man with Mozart
flowing from his hands. I want nothing

but to put my fingers inside his mouth,
let that prayer hum through my veins.
I want crawl into the hole in his violin.

I want to sleep there
until my flesh
becomes music.

Ocean Vuong emigrated to the U.S. in 1990 from Viet Nam at the age of one and currently resides in New York City as an undergraduate English Major at Brooklyn College, CUNY. His poems have received an Academy of American Poets award, the Beatrice Dubin Rose Award, the Connecticut Poetry Society Al Savard Award, as well as two Pushcart Prize nominations. His work has appeared in Word Riot, the Kartika Review, Lantern Review, SOFTBLOW, Asia Literary Review, and PANK, among others. He enjoys practicing Zen Meditation and is an avid supporter of animal rights