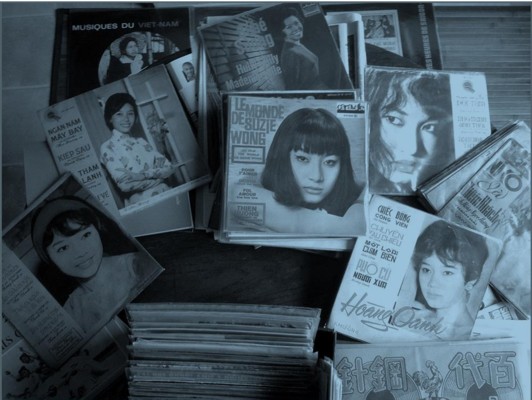 We arrive at Dan Sinh market in Ho Chi Minh City on a sweltering afternoon. The monsoon season is just starting. After parking our scooters, we dive into the stands, which sell everything from army apparel to fruit and vegetables. A middle-aged man directs us to an antique stall. Immediately I spot discs inside a glass cabinet. The owner of the store pulls out more from various places. I go through the LPs hungrily, pausing now and then to wipe my sweating hands on my trousers.

I straighten my back and take it all in: somewhere, from another stall, Duy Khanh’s deep voice echoes softly. I recognise it as his later stuff, produced after 1975, in California.

Back to the LPs, some battered sleeves don’t correspond to the vinyl inside. Much to my delight though, I find a copy of Gap Nhau Tren Pho by Mai Le Huyen and Hung Cuong tucked inside a Hoang Oanh sleeve. I already have one at home in London, but will get it for a friend in Hanoi.

Next stop is Déjà Vu Audio. From the outside it’s not obvious there’s a record store inside, but there it is, on the third floor. Two friendly faces and tattered copies of Beatles albums on the wall greet us. Apart from a signed Japanese pressing of a Khanh Ly album – a highly sought-after record by arguably the most famous female singer from Vietnam – they don’t have much else. The owners say the last of their pre-’75s went to a Hanoian.

Back on our scooters, we dodge the traffic to Le Cong Kieu, also known as Antique Street. After several inquiries, we stop at No 24. A plump lady leads us to a room at the back. The light is dim, but slowly things come into focus. In a corner are piles upon piles of vinyl, possibly hundreds of recordings. They are stacked and strewn on the floor, some without covers, exposed to the dust and humidity.

I plunge in, hoping to find a few gems. The storeowner hovers over me, shifting her weight from one foot to another. I move from shelf to shelf, wall to wall, to the front of shop with the lady close behind, never letting me out of her sight. We find a handful of cai luong (folk opera) LPs and some Chinese records. We pay her and scoot off through the rain.

I’m on a short trip to Vietnam. After the obligatory family visit, the catch-up with friends, I’m back on the streets, on the hunt for the music of the 1960s and ‘70s, when the southern capital was alive with the sound of nhac tre, or youth music, that issued from clubs, bars and peoples’ homes. It’s the sound of a culture that disappeared after the defeat of the southern regime more than forty years ago.

Nhac thu am truoc ‘75, or pre-’75 music, takes its name from the year when communist troops entered Saigon, bringing an end to the war. The communists called it nhac vang or yellow music. In Fragments of the Present: Search for Modernity in Vietnam’s South, Philip Taylor explains what the Vietnamese thought it meant: “Most thought it was Chinese in origin. Some thought it meant ‘weak’, one speculated it meant ‘feudal’, yet another thought it meant ‘sick’.”

The communists saw it as neo-colonial poison, remnants of a society that had lost its way after many years of French and American influence, so they outlawed it. Personally, I think the communists hated nhac vang because the songs were sentimental and often about South Vietnamese soldiers on leave with their lovers. They didn’t like Trinh Cong Son, the most famous songwriter of that period, whose pacifist lyrics were deemed dangerous by both the northern and southern regimes.

As a result of the ban, the master tapes were destroyed, thousands of tapes and records were smashed and printed lyric sheets burned. What remains, especially the vinyl, is in a sorry state; scratched, chipped and grooves encrusted with dust and dirt. One collector told me he believes some of the scratches were deliberate, in case the owner was caught. Another collector told me the story of an amateur singer-songwriter whose family, upon his death, burnt his collection of vinyl as though they were burning votive papers for deceased ancestors, symbolically sending the sounds of Saigon into the afterlife.

After ‘75, many musicians joined the throngs of boat people and left Vietnam. The largest number made it to the United States. As a result, a proliferation of record labels sprouted: Paris By Night, Asia Entertainment, Hoa Phuong, Hai Dang, Diem Xua and Sun Valley. These diaspora communities crafted a new sound to go with their new homes, sometimes even integrating the mainstream music of their adopted country, giving it a Californian touch. Others clung to a more familiar sound, voicing their nostalgia for the homeland, pouring their loss into their lyrics. For the length of a song, many of my parents’ generation would be transported back to Vietnam.

As a child growing up in such a household, I couldn’t escape the music. We had a slick sound system, with large speakers and the obligatory karaoke microphone. Coming home from school, I would cringe as Tuan Vu’s – think Cliff Richard or Rod Stewart – voice soared from our small flat. I would beg my parents to keep the volume down lest the neighbours complain. Now, ironically, it’s me who’s blasting out funky Vietnamese rock. For second generation Viet kieu – overseas Vietnamese – like myself, the music from that period provides a small portal into a milieu, when a distinctive musical culture and industry came out of Saigon.

Strangely enough, though, it wasn’t my parents who introduced me to original recordings of nhac vang. That was Jason Gibbs, a librarian from San Francisco. It was through him I first heard the slow surf sounds of Gap nhau tren pho on YouTube and was instantly hooked. Another foreigner later introduced me to the world of vinyl one humid Christmas in Hanoi. It was the start of a love affair that has endured to this day. Vinyl collectors call themselves diggers – music archaeologists, excavating the physical remains of a bygone era.

It’s our last day in Ho Chi Minh City. We meet up with Bram, a vinyl collector from Belgium. We follow a couple of false leads before ending up back at Dan Sinh market. Bram and I dig into track after track of bolero, rumba and kich dong nhac. I sift through the LPs. My eyes light up: the black lettering against the yellow label shows up Trinh Cong Son’s Diem Xua, sung by Kim Loan.

The disc is chipped, but that doesn’t matter. I check with my wife if we have enough, minus lunch money and the taxi fare to the airport. We do, plus enough for a dozen 45s and a couple of lyric sheets. I stuff my new purchases under my arm and we head out of the market, leaving Bram with music spilling from his headphones.

Earlier in the week we were in Hanoi and paid an obligatory visit to Giang Nhạc Xua, another record shop. As I slide the flimsy door, I’m greeted by the cool breeze of the air conditioner and the owner’s wide smile. “Hello young brother,” Giang calls out from across the room. It was almost two years ago when I last saw Giang, when he had just quit his banking job to focus on his record business.

He had an enormous collection, around 10,000 pieces. It was an unorganised mess. Since then, the pace at which vinyl has taken off has been astronomical. Many rereleases have been pressed. Prices have inflated. Collectors combine their holidays with side trips to shops like Giang’s. Some of the trade has moved online. I wonder how this has affected his business.

I inquire after his pre-’75 collection, as he fills our cups with steaming green tea. “It’s all gone,” he says. “Foreigners come, they request it and they buy every everything.”

What’s left is a sad little cardboard box-full. I take it off his hands anyway.