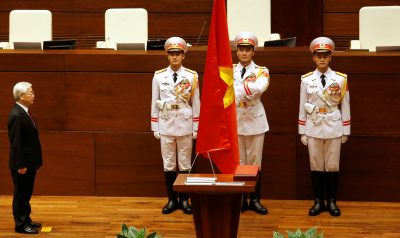 Weighing up political developments in Vietnam

This year marked the mid-point between Vietnam’s five yearly National Congress of the Communist Party of Vietnam (CPV). The eighth plenum of the CPV Central Committee met in October to initiate planning for the 13th Congress in 2021, appointing five sub-committees charged with drawing up Vietnam’s next socio-economic plan, amending party statutes, and vetting possible candidates for the next Central Committee and Politburo. A number of major domestic political and economic developments in 2018 will weigh heavily on these preparations.

The first of these is Vietnam’s ongoing anti-corruption campaign, which uncovered massive fraud by officials connected to the state-owned Petro Vietnam and three major banks. In a bizarre episode, Vietnamese security officials kidnapped a Petro Vietnam executive who had fled to Germany, brought him back to Hanoi and sentenced him to two life terms in prison. Petro Vietnam’s chief executive officer was also sentenced to death.

The anti-corruption campaign extended its reach by indicting a deputy minister in the Ministry of Public Security, a military officer who headed a military-owned company, and a network of senior party officials in Da Nang city. In March 2018, Dinh La Thang – the former party leader in Da Nang who was dismissed from the Politburo – became the first former Politburo member to be sentenced to prison.

Another challenge for the CPV this year was public opposition to two draft bills that were tabled for debate in the National Assembly. The first, a Law on Special Administrative and Economic Zones, provided for the establishment of three special economic zones – Van Don in the north, Bac Van Phong in the centre and Phu -Quoc in the south. The second, a Law on Cyber Security, consolidated scattered pieces of legislation in an attempt to regulate the internet.

Vietnamese social media charged that Chinese business interests would be given 99-year leases in the special economic zones and that this was a threat to national security. The Law on Cyber Security was widely viewed as restricting free speech in the social media. Massive anti-China public demonstrations and protests erupted in June, with protests turning violent in Binh Thuan province. Political analysts attributed the protests to an undercurrent of public dissatisfaction with malaise in the government.

The government has postponed consideration of the Law on Special Economic Zones to 2019.

Secretary General Nguyen Phu Trong further consolidated his leadership position when he was elected concurrently as state president following the death of president Tran Dai Quang in November. This development has the potential to upset the previous leadership balance and place enormous power in the hands of one person. Trong will now play a decisive role in shaping both policy and personnel selection for the 13th National Congress.

Vietnam’s human rights situation further deteriorated as public security authorities continued to arrest, try and imprison a range of political and civil society activists under vague provisions of the Penal Code. These activists were associated with a variety of issues including Chinese activities in the South China Sea, environmental concerns, labour rights and constitutional entitlements. Two prominent activists, lawyer Nguyen Van Dai and Nguyen Ngoc Nhu, were released from prison and exiled to Germany and the United States, respectively. There are an estimated 84 - 92 prisoners of conscience currently imprisoned in Vietnam.

Despite these concerning political events, Vietnam’s economy grew strongly at almost 7 per cent of GDP in the first three quarters of 2018, making Vietnam one of the world’s fastest growing economies. Foreign direct investment in clothing, footwear and especially electronics led to surging manufacturing exports.

Vietnam was also the short-term beneficiary of the US–China tariff war as Chinese and foreign companies relocated to Vietnam. Vietnamese exports to the United States rose and Vietnam recorded a trade surplus of US$35 billion.

Looking ahead, Vietnam will face at least four major challenges in 2019.

Most importantly, Vietnam’s leaders must address the underlying social malaise that spurred the widespread protests by addressing governance issues, including land, labour and environment issues as well as internet freedom.

Second, Vietnam’s leaders must evaluate the efficacy of the party secretary general concurrently holding the post of state president and decide whether to extend or end this arrangement when Nguyen Phu Trong’s term expires in 2021.

Third, Vietnam must undertake determined economic reforms, such as cutting subsidies to state-owned enterprises to end its US-designated status as a non-market economy. Vietnam should also alter its present exchange rate policy to forestall being designated by the US as a currency manipulator.

Finally, Vietnam needs to ensure the country’s future leadership by identifying ‘strategic cadres’ – the next generation of clean party leaders – to be elected to the new Central Committee in 2021.

Carlyle A Thayer is an Emeritus Professor at the University of New South Wales, Australian Defence Force Academy, Canberra.