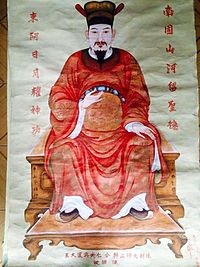 Generalissimo Tran Quoc Tuan was the national hero. He was Tran Lieu’s son. His grand father was Chancellor Tran Thua under the reign of Ly Hue Ton (1211- 1224). His mother’s name and his birth year were unclear. We try to clarify them all.

It was written in history that his birth year varied from 1228 to 1231, and that his mother was Princess Tran Thi Nguyet (Thien Dao Quoc Mau).

Prince Sam was enthroned in 1211. It was King Ly Hue Ton, who was surrounded by the members of the Tran family:

King Ly Hue Ton was physically and mentally weak for addicting to rice wine. He had two princesses:

In 1224 King Ly Hue Ton resigned. He chose Princess Chieu Thanh as his successor. It was Empress Ly Chieu Hoang, who was enthroned at the age of 7.

Princess Chieu Thanh was born in 1218. She became Empress in 1225 at the age of 7. She ceded the throne to her husband Tran Canh in 1225 when the latter was 7 years old. It was King Tran Thai Ton.

In 1237, at the age of 21, Thuan Thien was forced by Chancellor Tran Thu Do to live with King Tran Thai Ton, her husband’s younger brother, when she was in pregnancy. Queen Chieu Thanh, Thuan Thien’s younger sister, was demoted for not having a son to succeed to the throne.

Tran Lieu lost his lovely wife Thuan Thien in 1237 to his own younger brother, King Tran Thai Ton, in accordance with Chancellor Tran Thu Do’s arrangement for Queen Chieu Thanh had no child with King Tran Thai Ton. We don’t know when Tran Lieu married Tran Thi Nguyet. The title Thien Dao Quoc Mau showed she belonged to the royal family. The Tran Dynasty was born in 1225. Endogamy was encouraged and legalized by Chancellor Tran Thu Do in order to strengthen the Tran Dynasty.

Tran Quoc Tuan was a handsome, strong, brave and intelligent child. He was good at Chinese characters and martial arts. His father, Tran Lieu, hated Chancellor Tran Thu Do, who forced his pregnant wife Thuan Thien to leave him to live with his younger brother, King Tran Thai Ton. Tran Quoc Tuan loved his father and understood his father’s dolorous state of mind. He seemed not to hate Tran Thu Do. He did know the Chancellor did anything abnormal, amoral and cruel just to consolidate the Tran Dynasty, and to ensure the country’s security, integrity and prosperity. 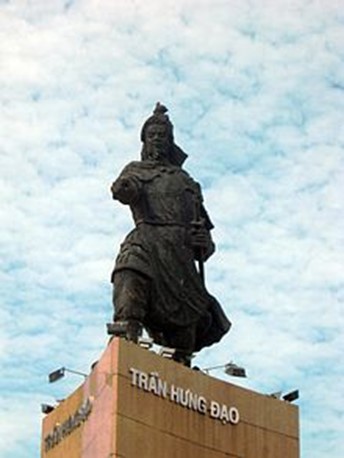 The Great Khan took control of 12 million km2 of Eurasian territories with 85 million people by the end of the 13th century.

In 1257 the Mongols invaded Dai Viet from Yunnan. Tran Quoc Tuan was in his twenties. He was married. He was General appointed by King Tran Thai Ton. But he failed to stop the Mongol troops from entering Dai Viet. He wasn’t well known in the first invasion of the Mongol troops commanded by Wouleanggotai (Ngot Luong Hop Thai).

What a surprise! The Mongols entered Dai Viet without difficulty but they failed quickly. They were in a hurry to withdraw their troops from Dai Viet. Chancellor Tran Thu Do’s firmness of fighting the invaders, tropical climate and food shortage contributed to the victory of Dai Viet. The same thing occurred in Russia 6 centuries later. The Russians used the ‘no-man-land tactics’ (cold winter, food shortage, lack of shelters, ‘rapoutiza’ in the Spring) to defeat the French troops.

Great Khan Kublai’s pride was damaged by the unsuccessful military campaign in Dai Viet in 1257. Relations between Dai Viet and the Great Yuan got sour. Great Khan Kublai tried to humiliate Kings Tran Thanh Ton (King: 1258- 1278) and Tran Nhan Ton (King: 1279- 1293) by asking them to travel to Khanbaliq (Beijing: Bac Kinh) to pay respect and submission to the Mongol Emperor. The Viet Kings had a series of reasons to stay in Thang Long. Their defiance angered Kublai Khan.

In 1282 King Tran Nhan Ton sent his uncle Tran Di Ai to Khanbaliq (Beijing) as his especial envoy. Kublai Khan was very angry at King Tran Nhan Ton’s absence. He gave blessing to Tran Di Ai as King of An Nam (Dai Viet) and ordered Shai Shuan (Sai Thung) to escort Tran Di Ai back to Thang Long. Arriving at the Nam Quan Gate Sai Shuan’s troops were attacked by the Viet troops. An arrow hit one of Sai Shuan’s eyes. Tran Di Ai was captured (1282). Shai Shuan and his soldiers ran back to China. It was a serious diplomatic and military wound for the Great Yuan.

The invaders were numerous and battle- tested. Their strength was incredible. The Viet troops couldn’t stop them. They occupied Thang Long. Prince Toghan commanded the ground forces while Omar (O Ma Nhi) and Sogeto (Toa Do) and their troops went South by sea, claiming to attack Champa.

Leaving the capital King Tran Nhan Ton fled to Thanh Hoa. Sometimes he moved to Quang Yen. He was always escorted by Generalissimo Tran Quoc Tuan. Some members of the royal family such as Tran Ich Tac, Tran Kien, Tran Tu Vien bowed to Toghan. King Tran Nhan Ton looked demoralized. Like Tran Thu Do before King Tran Thai Ton facing the first Mongol invasion in 1257, Generalissimo Tran Quoc Tuan restored the King’s optimism, saying: “Your Majesty, behead me first if you would like to surrender to the invaders.” 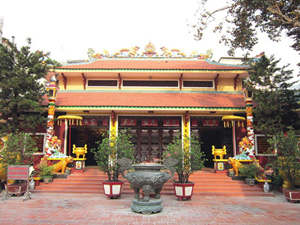 The remnant of Toghan’s defeated troops suffered heavy casualties in Van Kiep. Toghan ran for his life back to China.

The huge plan of conquering Dai Viet was smoky.

After victory King Tran Nhan Ton predicted military retaliation from the Great Yuan. He asked Generalissimo Tran Quoc Tuan if he was afraid of the next retaliatory invasion. Tran Quoc Tuan was self- confident. He believed in Dai Viet’s military superiority.

Third: the enemies weren’t enthusiastic to fight in a tropical country. They were tired when moving from China to Dai Viet. Physically they felt sick because of the tropical climate characterized by humidity, insects, tropical diseases. Psychologically they were homesick due to nostalgia and anti- bellum syndromes after two bitter defeats in 1282 and 1285.

In 1287, once again Toghan commanded 300,000 troops to invade Dai Viet by land and by sea under the pretext of escorting Tran Ich Tac back to Thang Long to be enthroned.

Tran Khanh Du was defeated by Omar in Van Don, Quang Yen province. Shortly after that the fleet of food supply commanded by Zhang Wen Hu (Truong Van Ho) was attacked by the Viet troops under the command of Tran Khanh Du in an ambush at the estuary of Luc Thuy Duong. The invaders lost a fleet of food with many weapons. Many of them were captured by the Viet troops. Escaping death Zhang Wen Hu returned to China by boat.

Toghan was in hopelessness. The Viet troops’ counter- attack was terrible. The invaders were in shortage of food. Their morale was too low. On the Bach Dang River Omar’s troops faced a bitter defeat without either fighting or seeing the enemies. Many of them were drowned. Omar and his Generals were captured. The invaders fought in retreat. Many of them were killed on the Sino- Viet border.